Skip to Content
Home / Kids and bikes on the Finnlines Ferry 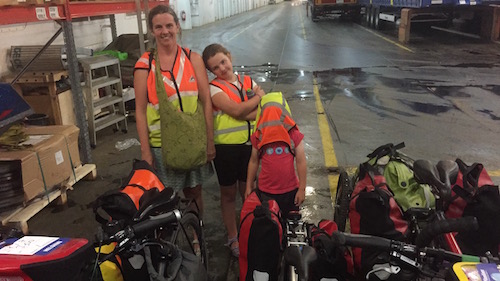 Our experience taking kids and bikes on the Finnlines ferry from Germany to Finland was an extremely positive one. To simply cycle onto the car deck and park up was a delight after wrestling bikes on and off trains, despite it being late at night. We didn’t however pay the €100 extra for a window. While we missed natural light in the cabin, we were glad that the darkness meant prolonged sleeps for everyone.

Time flies with kids on the Finnlines Ferry

The day aboard passed quickly. It was a day of stories read aloud, Lego, picnic breakfast, lunch and tea, time in the children’s play area, watching passing boats sail by, running around the helicopter pad on the sun deck, an afternoon nap and the Tour De France on the television. We were glad we took our own food as we deemed the food on board not in our budget.

The biggest hit with us, however, was the sauna and jacuzzi. What a joy to sit naked in a bubbling whirlpool and know you are making progress on your journey. The sauna and jacuzzi were spotlessly clean and surprisingly quiet. My daughter and myself used the women’s sauna a total of five times over our return journey and it was never busy. In fact we often had it to ourselves.

Our ferry journey to Helsinki coincided with the lunar eclipse so we wrapped ourselves in blankets and huddled on the sundeck to watch it. It was a real treat to witness such a sight away from the light pollution we are used to.

After a second good night’s sleep we awoke to announcements of our imminent arrival in Helsinki so we hastily returned to our trusty bicycles. We were there! Taking kids and bikes on the Finnlines ferry was definitely a great way to travel.

Sign up to get email notifications about Eco Family Travel. You can unsubscribe at any time.
This site uses cookies to help make it easier for you to use. Click here to find out more.