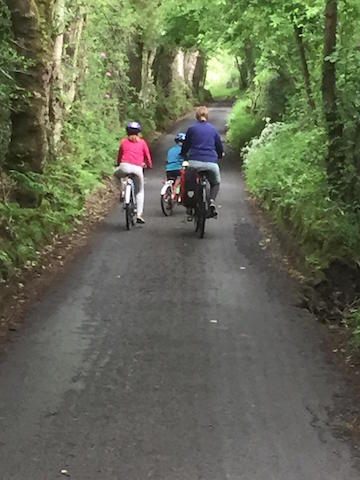 Family cycling in the Forest of Bowland was lots of fun. After an inspiring May Bank Holiday weekend at the Cycle Touring Festival, we decamped two miles up the road to Cross Lane Farm. We wanted to explore the surrounding area on two wheels and were impatient to sample some family cycling in the Forest of Bowland with our seven and nine year old.

We cycled nine miles from Cross Lane Caravan Park via Whitewell and Dunsop Bridge to Langden Brook Car park in the Trough of Bowland. On the way back we used Dunsop Road instead of Hall Hill. This added an extra mile but kept the route flatter and therefore more cycle-able for all of us. If you began in Waddington it would add an extra mile each way. Using Clitheroe train station as a starting point, would add an extra eight miles in total. Although our children have cycled thirty miles in a day on occasion, we currently find twenty miles is about the right length for an enjoyable day ride.

We set off along very a quiet country lane, one adult cycling beside each child. The road was undulating and we quickly enjoyed the benefits of whizzing so fast downhill that we were carried up the next hill with little effort. “This is better than any rollercoaster!” exclaimed my delighted daughter. We are more accustomed to slogging up long hills in Sheffield.

The next bend revealed a longer, steeper hill and our daughter slowed right down. “It’s too hard!” she complained. We were a bit taken aback so stopped to beckon her on. “You manage steeper hills in Sheffield,” I said. “We’ve only done two miles, so you really need to keep going.” She objected all the way to the top, where Jeremy noticed her back brake was wedged on. After a fiddle her wheel was free and that was the end of the complaints for the day! A lesson to me to pay attention to what is really going on.

This was one of our first long rides that was entirely on road. We usually look for traffic free paths for obvious reasons. However, the lanes were quiet and we never felt in danger. The few drivers we met were careful, giving us plenty of room when overtaking. We liked this route as it was usually easy to see the road ahead. This helped with oncoming traffic and also for getting a run-up for an upcoming hill.

There were some blind bends and brows and we made sure we were either two abreast or if it seemed safer to go in single file, that an adult was at the front and behind. We talked to the children about the road ahead, what to expect, what could happen, what we were looking for in order to help them learn road awareness.

The lanes were quiet, any passing traffic was respectful and the surfaces were smooth for our day of family cycling in the Forest of Bowland. The weather was perfect too: no wind or rain, some cloud and a pleasant 16 degrees.

Cycling as a family means we really get to connect with each other and our surroundings. We chat, stop and look at horses or hay bales with funny faces, at rivers and at caterpillars. I am continually astounded by my son’s ability to spot small insects or worms while cycling and screech to a halt to examine them.

Cycling through tree tunnels was beautiful. Everything was lush and green and the birdsong was marvellous. We made good progress and soon came to a steep descent down Hall Hill to the Inn at Whitewell. Halfway down we got the children to stop to cool their brakes, then carried on whizzing along.

From Whitewell, we followed the river to Dunsop Bridge, again enjoying the undulating roads. We were also glad that going this direction was more up than down as we knew we would appreciate a greater proportion of downhill on the way back. While family cycling in the Forest of Bowland, we spent quite a lot of time giving the children gear-changing tips. They are both adept at changing gear but we wanted to help them learn to use the gears to maintain speed and momentum as efficiently as possible.

Just before Dunsop Bridge, we peeled off onto the narrow road that winds its way right through to Lancaster. The car and van drivers were still respectful, but we were more conscious of the speed / rate of traffic as we cycled further into the Trough of Bowland. It is stunning countryside and we enjoyed magnificent views.

We arrived at Langden Brook car park just under two hours after setting off. Here we met some friends who had driven from the campsite and we set off to walk towards a ‘castle’ we had seen on a map. However, the information board at the start of the walk informed us that the ‘castle’ was actually more of a barn and so excitement dwindled rather. Having recently read “Five have a Wonderful Time” we had been picturing secret tunnels but it was not to be.

The walk along the valley bottom, alongside the river is beautiful. However, after an hour’s walk and a picnic, we decided to let the rest of the group go and check out the castle-barn and the four of us would return to the bikes. We had ten miles to cover on the way home and we didn’t want energy to run out before we made it back to the campsite.

The return journey was a delight. More downs than ups meant we whizzed along, often in our hardest gears. The views were even better on the way back. As we cycled towards the hills, the fields around seemed more expansive.

Our attempt to stop at a tearoom in Dunsop Bridge resulted in great disappointment. We followed the signs that said “Open 6 days a week” to discover a “closed Tuesdays” sign on the door. Yes, it was Tuesday. Still, we were glad to discover we were at the centre of the United Kingdom!

The Inn at Whitewell

Still, it meant that the next place offering refreshment was the lovely Inn at Whitewell. We were concerned it would be overpriced but we managed some homemade biscuits, a large-freshly baked scone with jam and cream, 2 teas and a large hot chocolate with cream to share for a total of £12.

From Whitewell, we went the longer way round to avoid the steep bank up Hall Hill. Instead we used Dunsop Road and turned left at the end to rejoin our earlier route at Cow Ark Farm.

We rolled back down Cross Lane and back to our campsite, where the adults had a well-deserved cuppa and the children parked their bikes but carried on running around. We had not managed to tire them out. All of us will definitely be glad to do some more family cycling in the Forest of Bowland. Cross Lane campsite was cheap, very basic but adequate, with stunning views of Pendle Hill.

You may like to read about when we cycled on the Trans Pennine Trail, when we did some no-car family camping in Edale or when we used the Hull ferry to go cycling in Holland. 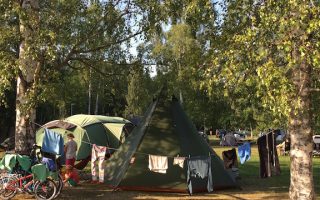 No-car camping: is it possible with kids? 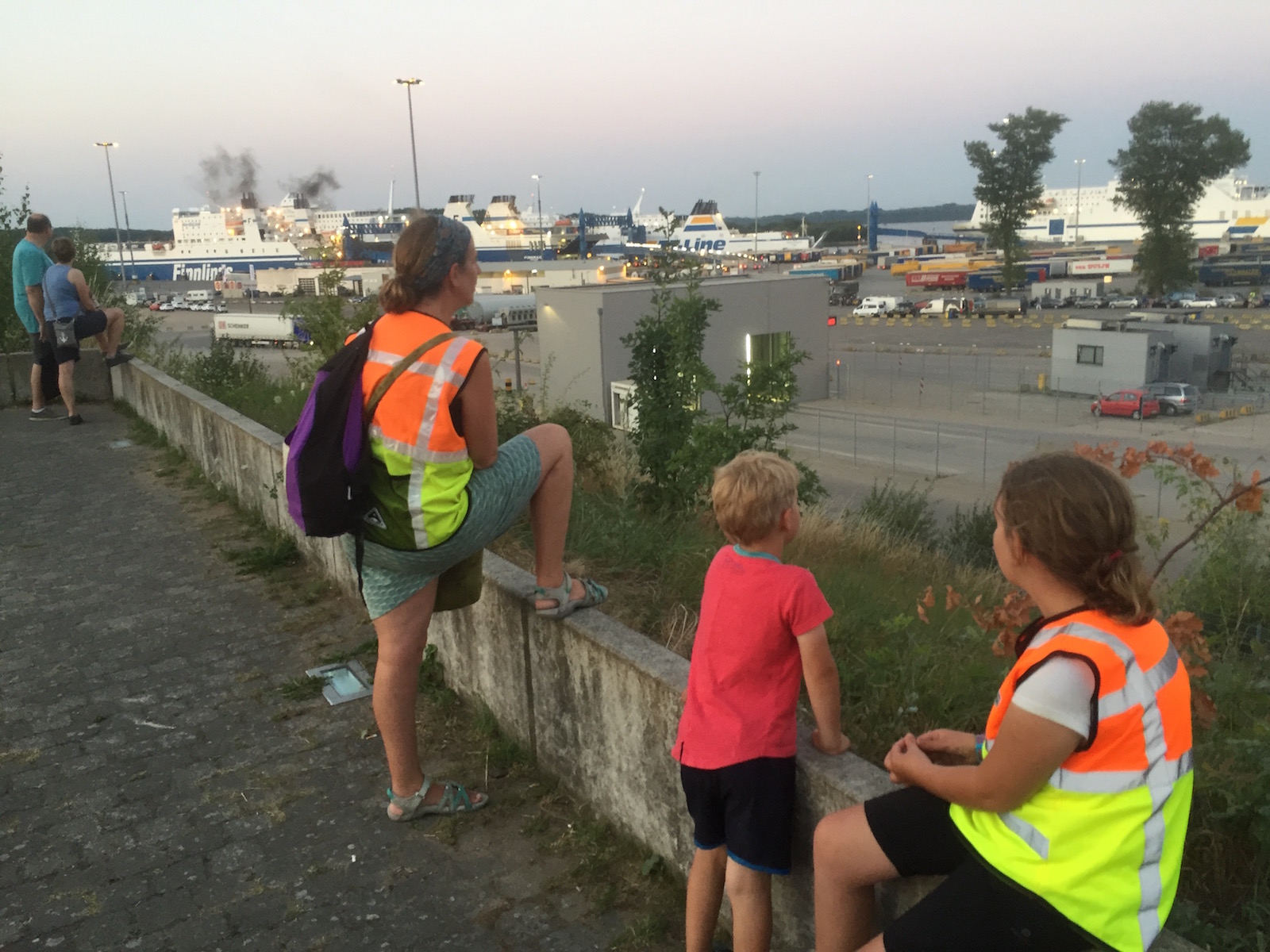