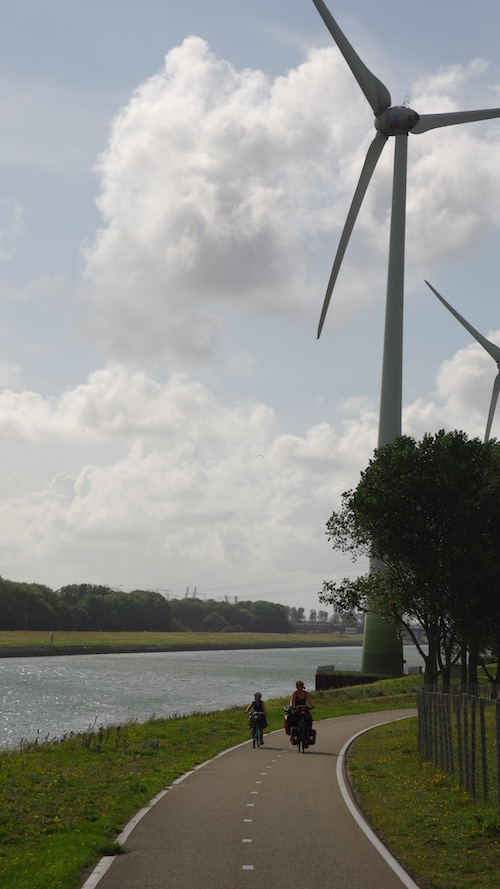 Cycling from Europoort is not as difficult as you might imagine. Before I researched it, I imagined cycling amongst hoardes of container lorries, with chimneys belching all around us. However, this is the Netherlands and the infrastructure has bicycles as an integral part. Cycling from Europoort is no exception: there traffic free paths almost as soon as you’re off the ferry and the bike routes are extremely well signed.

On arrival into Europoort we checked our Falk cycle maps and headed for the RET Fast Ferry at Pistoolhaven which would take us and our bikes to Hoek Van Holland. The traffic-free cycle paths include a wide cycle bridge over a motorway. The view of industrial coal (or tar) heaps and the vast herring gull colony isn’t particularly inspiring but the cycle paths are wide and safe and it’s only about 8km before you’re at the Fast Ferry. We managed it in about 40 minutes, despite the strong headwind.

Twenty minutes later, we were in Hoek Van Holland, ready to seek out a hot drink and second breakfast. There are hotels, campsites, cafes and supermarkets in Hoek. We wouldn’t recommend the cafe we went to; everything we wanted seemed rather too much trouble to the lady in charge.

There are two cycle routes towards Den Haag from Hoek Van Holland and this time we stayed more inland in an attempt to shelter from the wind and save ourselves two kilometers. The cycling is a joy in the Netherlands, especially with children. After repeated shouts from us to, “keep right”, they settled in to their journey, cycling at their own speed without the close adult supervision necessary when cycling in much of the UK. They received lots of smiles and thumbs-up from other passing cycle tourers.

We cycled another lovely 13km past open fields, tulip hothouses and the beautiful “De Vier Winden” windmill built in 1882. We reached our campsite for the night, the members only NTKC site De Haan, and it was still only 13.00.

Less than twenty four hours after we left home, we had the tent up and the children were swimming and canoeing in a canal about 50 metres from the tent. The holiday had definitely begun. Cycling from Europoort definitely felt like an easy option.