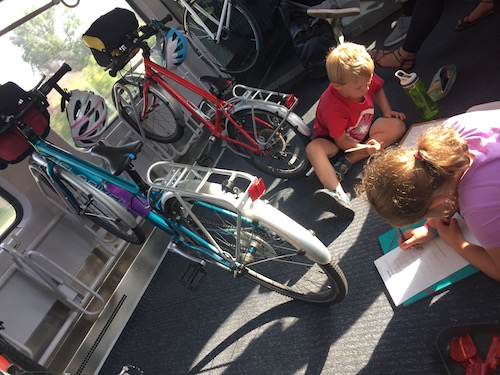 The travel day I dreaded the most was the one where we put our bikes on the train from Den Haag in the Netherlands to Lübeck in Germany. Actually make that four trains. What seemed straightforward when I booked using Deutsche Bahn’s UK phoneline in March, seemed quite an undertaking in reality. We had reserved our four bikes on the two intercity middle legs of the journey: Amersfoort to Osnabrück and Osnabrück to Hamburg. The two other trains, Den Haag to Amersfoort and Hamburg to Lübeck, were regional trains which were unreservable.

What could go wrong?

My mind raced with things that could go wrong. What if we didn’t pack up our stuff in time? What if we had a puncture during the 10km cycle ride to Den Haag station? What if one of the children fell off their bike and was inconsolable? What if the first train was full of bikes and the conductor refused to let us on? And so on. Jeremy was laid back saying, “Whatever happens we’ll deal with it. It’s all part of the adventure. It’s great we can put our bikes on the trains.” But I felt sick. I had put so much energy into planning all this, I didn’t want to deal with any more variables. I wanted it to go smoothly. I wanted us to get our bikes on the trains with no hassle.

So to appease me, we decided to get leave the campsite in time to get an earlier train than the necessary 12.23 from Den Haag, leaving us plenty of breathing, puncture, tantrum, grumpy conductor space. We packed up as much as possible the night before and left at 9.15am with me trying to channel my stress by imagining being back in my sleeping bag at the end of the day.

We boarded the 10.53 train at Den Haag without incident, although there were several other cyclists also trying to use the same space. Fortunately, we arrived in plenty of time to discuss who was going where and put the bikes on the train in a way that meant everyone could get their bikes off easily. This train contained two designated bike areas, each meant for four bikes, but we managed to squeeze six into one space.

Ready to board the IC Berlin

Despite the long wait for the international train at Amersfoort, I was glad to be there early and relaxed a little knowing we had made it for the reserved train. We chatted with station staff and positioned ourselves in the correct place on the platform for the bicycle carriage. There is also a handy train map on the platform, detailing where each carriage is expected to stop. The staff warned us, though, that sometimes the train comes in back-to-front and so you can’t always guarantee you’re in the right place to put bikes on the train.

Managing the children’s expectations is key. They always receive a briefing which goes something like this:
“Hands on bikes please. We’re looking for the bicycle sign on the door of Coach A. Be ready to follow us to the right door. It will probably be just here but we might have to run to the other end of the platform as the train comes in. Leave your bike at the door. Get on the train and go and find seats. Stay together.”

The children are so used to this that it makes it much easier. I don’t miss the days of having a child in a sling while putting bikes on a train, or having a three year old to hold on to. Still, it was possible then and we did it.

Bikes on the train in Germany

The bike carriages on the German Intercity Amsterdam-Berlin line are impressive. Bike spaces take up half the carriage. Each bike has its own slot number which must be reserved. This takes away some of my anxiety as I know there is space for our bikes. However, there is not much wiggle room and still getting our four bikes, twelve panniers, collapsible trailer and 90l kit bag on in three minutes is a little frantic.

There were two other cyclists with four panniers each boarding with us. The bags must all come off the bikes to fit through the doorway and it was a task to keep track. The train and bike space were super busy but the key thing is to get everything on and then worry about where to put the stuff once the train is moving. It all shakes down in the end but my hurrying gifted me a few extra bruises from pedals and handlebars.

Happy to have got the bikes on the train, we settled down to the 2 ½ hour journey. I squeezed myself in between the two children and read “My dad’s got an Alligator!” by Jeremy Strong out loud, while Jeremy stretched out with two seats to himself and had a snooze. We swapped around and the children played with Lego mini-figures, then Esther read her book while Jeremy patiently answered Nathaniel’s inexhaustible questions about trains and track. The children squabbled so I handed out haribos and took them on a walk the length of the train to receive a free Deutsche Bahn model train toy.

We arrived at the border where the Dutch engine is replaced with a German engine. My heart sank as the voice over the tannoy announced a delay in the arrival of the German engine. This would mean a missed connection at Osnabrück and us needing to get a different train with our bikes; a train where the bicycle reservations we didn’t have were mandatory.

I queued at the Osnabrück information desk to be given a new route print out that told us to get regional trains instead, which would mean us getting all our stuff on three more trains and arriving at Lübeck at 10pm, half an hour after our campsite closed for the night. I asked for an alternative and was directed to another desk. It was worth the wait. The lady was sympathetic and responded by telephoning two international trains to ask if they had any space in the bike carriage. I was relieved to hear that the second train could accommodate us.

Getting our bikes on the train was a comparative delight. It was so quiet and we spread out on the floor of the almost empty bike carriage to picnic and do some drawing. The strong air-conditioning here was a welcome relief.

Hamburg is a crazily busy station, but we were glad of the 50 minute break from being on a train and the chance to refuel with chips and ice-cream.

The bike space on the regional train from Hamburg to Lübeck was spacious and easily accommodated all our belongings. We didn’t even have to collapse the trailer and there were a couple of other bikes on the train already.

We were all relieved to arrive at Lübeck; our joy only marred by a non-functioning lift. Still, as ever, people were on hand to help us as we lugged our stuff up the stairs. It was a short 3km flat ride on predominantly traffic-free paths to the campsite. We arrived at 9.25pm, just before reception closed and just in time to put up the tent before dark. I was finally back in the sleeping bag I had been visualising all day.